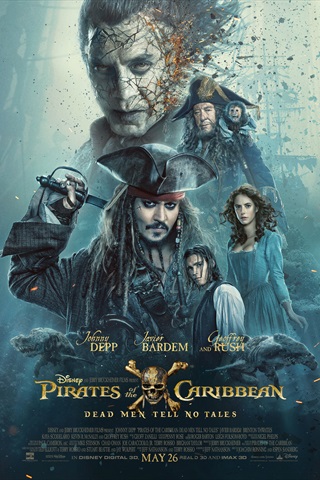 Pirates of the Caribbean: Salazar's Revenge

Pirates of the Caribbean: Salazar's Revenge

Captain Jack Sparrow finds the winds of ill-fortune blowing even more strongly when deadly ghost pirates led by his old nemesis, the terrifying Captain Salazar, escape from the Devil's Triangle, determined to kill every pirate at sea... including him. Captain Jack's only hope of survival lies in seeking out the legendary Trident of Poseidon, a powerful artifact that bestows upon its possessor total control over the seas. Movie in English with subtitles in Latvian and Russian. Available in 3D and 2D.

Pirates of the Caribbean: On Stranger Tides

Pirates of the Caribbean: On Stranger Tides

Captain Jack Sparrow crosses paths with a woman from his past, and he's not sure if it's love -- or if she's a ruthless con artist who's using him to find the fabled Fountain of Youth.

A proud military man, Colonel Claus von Stauffenberg is a loyal officer who serves his country all the while hoping that someone will find a way to stop Hitler before Europe and Germany are destroyed. Realizing that time is running out, he decides that he must take action himself and joins the German resistance. Armed with a cunning strategy to use Hitler’s own emergency plan – known as Operation Valkyrie – these men plot to assassinate the dictator and overthrow his Nazi government from the inside.